SAFETY FIRST-This guy should have tried our LG Hanger System 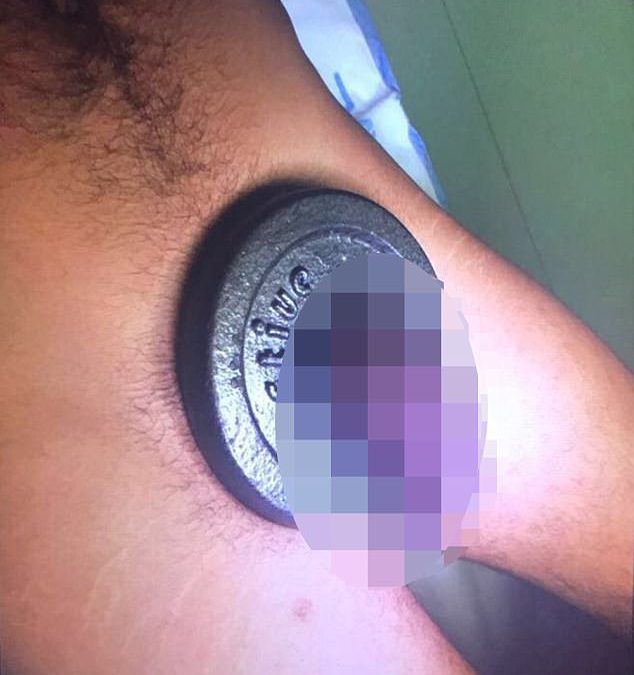 Taken directly from KOMO News Website post:
Man reportedly gets penis stuck in barbell weight, firefighters use saw to get it out
by Stephen Pimpo Jr./ABC7

A weight that got stuck on a man’s ” sensitive body part” in Germany. (Photo: Worms Fire Brigade)
AA

WORMS, Germany (ABC7) — It took three hours of work with a cutting grinder, vibrating saw and a hydraulic rescue device to get a man’s penis out of a barbell weight on Friday.

Firefighters in Germany were called to a hospital in Worms for a man with a “very sensitive body part” stuck in the hole of a 2.5 kilogram weight, according to a translation of a post on their Facebook page.

Media outlets like SB Nation, The Kansas City Star, Daily Mail and The Independent all report that the body part was the man’s penis.

The fire department says it was the result of a “curious training accident.”

“Please do not imitate such actions,” fire officials warned on their Facebook page.

The weigh was left cut into five pieces following the removal process.

The fire department’s full statement, according to Google Translate, can be read below:

How a few of our fire fighters can be so delicate is shown by a message from the somewhat different kind which arrived at the control center today, Friday, 15.09.2017. The professional fire brigade was called to the hospital in Worms. One person had a very sensitive body part in the hole of a 2.5 kg dumbbell disc clamped. With the aid of the cutting grinder, a vibrating saw and a hydraulic rescue device, the weight could be removed after three hours.

The fire brigade and a firefighter of the voluntary unit were the city center.

Please do not imitate such actions!”